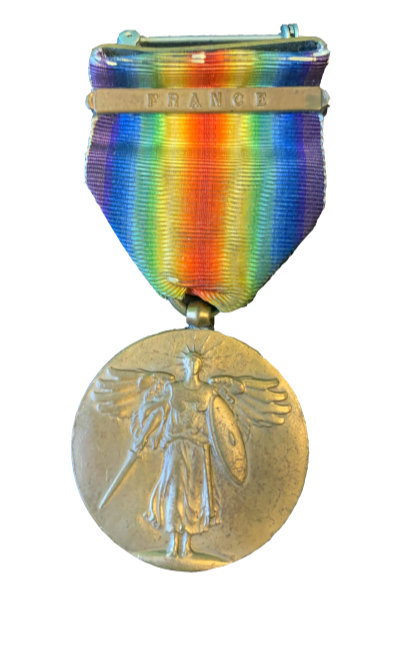 The Great War for Civilization

I nearly brought my grandfather’s Victory Medal with me when I went to France last summer. I thought about using it to ward off the war-monger accusations that invariably come from Europeans when I take classes in France. I have resorted to asking if any of them have relatives or ancestors who came to the United States to prevent us from killing everyone or committing genocide on an industrial scale. Of course, almost all Americans have family who went to Europe. The countryside there is covered with their graves.

My grandfather said nothing about the Great War. I never really understood why until I read the historian Paul Fussell’s The Great War and Modern Memory, a book that I highly recommend. Fussell seems to have read virtually everything, including poetry and countless letters to loved ones at home. The soldiers said nothing at all to their families about their true conditions to protect them from the reality of trench warfare. According to Fussell, “the main motive determining these conventions was a decent solicitude for the feelings of the recipient. What possible good could result from telling the truth?” *

The truth came from the writers and poets such as Wilfred Owen, who in Cramped In That Funnelled Hole ** wrote:

Cramped in that funnelled hole, they watched the dawn

Open a jagged rim around; a yawn

Of death’s jaws, which had all but swallowed them

Stuck in the bottom of his throat of phlegm.

They were in one of many mouths of Hell

Not seen of seers in visions, only felt

As teeth of traps; when bones and the dead are smelt

Under the mud where long ago they fell

Mixed with the sour sharp odour of the shell.

This is what our grandfathers hid from us out of a “decent solicitude for the feelings of the recipient.”

Wilfred Owen was killed in battle on November 4, 1918, a week before signing the Treaty of Versailles, one more tragedy in the great and deadly folly that was the Great War. Afterward, war would no longer be a sport played by aristocrats at the expense of the common man. Instead, The Great War for Civilization gave us Armistice Day, now Veterans Day, and the men and women who would go on to transform America into a society of merit. Those veterans, so often graduates of land-grant colleges, provided the knowledge and skills to improve our agriculture, our water, our food quality, our environment, our roads, and our bridges.