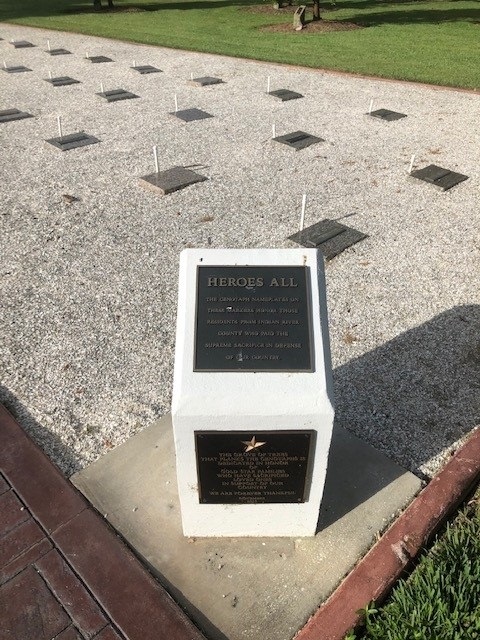 My first recollection of “Decoration Day” is watching a parade from the window of our apartment in Queens, New York. Soldiers carrying rifles and uniformed veterans of the First and Second World Wars marched to a small memorial up the street that had been decorated for the occasion. There may have been Korean War vets in the group, but it is the World War I uniforms that I remember most. My grandfather, with whom we lived at the time, served in France during the Great War. I still have his hat, discharge papers, and victory medal. His papers, signed by Infantry Captain Thomas M. Hamilton, certify that he was “sincere, honest and faithful” as well as of “excellent” character. There were no Civil War Veterans by then.

My grandfather was lucky, he came back from France to marry my grandmother, which makes me lucky as well. I often think of Decoration Day when I stroll through Memorial Island, Vero’s magnificent tribute to the men and women who died in the service of our country. Many times, I have stood by the rows of neatly tended markers, often decorated with flowers, wondering about the men whose names are engraved there, their families, and the immense sacrifice that they made. Too many have died too recently. I imagine that most of these heroes, all of whom are unknown to me, were also sincere, honest, faithful, and of excellent character. I picture them all that way.

The Civil War made Decoration Day a necessity. Nearly every town and village in the nation contained the remains of those who made the supreme sacrifice. Cherished youth extinguished in war became the common experience of most Americans. Yet, not until 1971 did Memorial Day become a federal holiday. Unfortunately, the need for such a day continues.

This and every Memorial Day we remember the Americans who sacrificed their lives for our nation. We also express our gratitude to all of those who have served and continue to serve their country. God bless America.